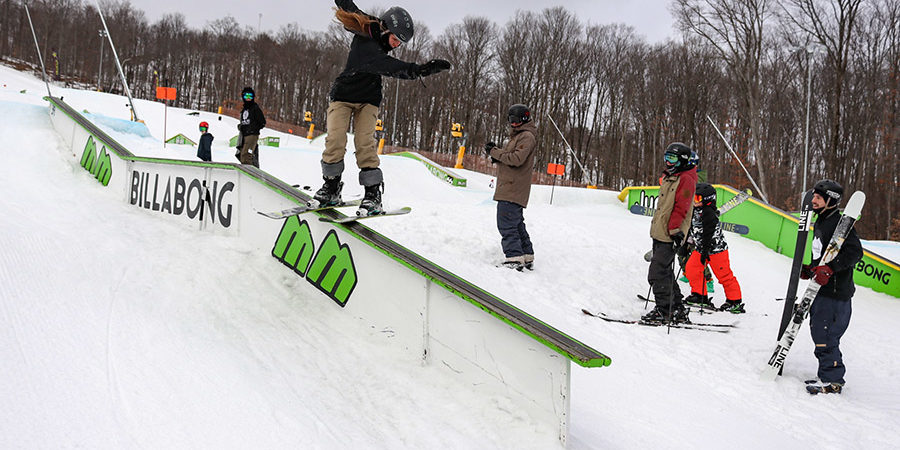 Bella Bacon Has Sights on Skiing Slopestyle with Olympic Team

Ellicottville has become a place that world-class athletes have lived and grown. Most of whom are athletes of the winter outdoor variety. Using the two resorts in Ellicottville as their milieu to hone their skills of harnessing gravity to slide quickly downhill on snow.

A teenage girl that grew up in Ellicottville is one of those athletes who is aspiring to take her virtuosity to great heights as another Olympic hopeful from here. Bella Bacon who started “riding Holiday Valley” when she was 2 is now the 15 year old skier that is professionally following in her fathers board tracks.

William “Billy” Bacon, who was also a professional rider is proud to “expose her to things I loved most when I was in the industry, mainly new resorts and terrain.” He told the Villager revealing he was “on Burton Snowboards B-team, and I got in a few videos and published in a bunch of magazines, but my favorite part was doing research and development on new products and technologies.”

Bacon moved to the area with his wife Christine Bush Bacon who grew up in Ellicottville. They have three children, Bella being the middle has become very adept in the downhill snow sports and has grown beyond the small hills of the Allegheny Plateau and has moved to bigger and better regions to prove herself worthy on the world stage.

The Villager caught up with Bella through her father and learned a little more about her and her pursuit for bettering herself in the sport of skiing. She said she started her schooling at ECS and her skiing at Holiday Valley. “I am 15 years old and have been competing since I was 9 years old, originally in moguls. From there I won a few competitions and gradually changed to slopestyle. I won regionals at Killington when I was 12. Then I fell in love with slopestyle.”

Slopestyle is when a skier or snowboarder in a competition rides down the hill on a course with a variety of obstacles including rails, jumps and other terrain park features. Points are scored for originality, quality of tricks and amplitude.

“I love the feeling of landing a new trick and the adrenaline rush to fly into a massive jump. Since there are endless numbers of tricks in the book, you can get creative and throw whatever comes to mind!” Bella professed.

The Villager asked about where she rides and practices the most, she said, “My two home resorts are Holiday Valley, and Mount Saint Louis Moonstone.” (Ontario, Canada)

When asked about her near future plans with the sport Bella answered, “My plans for next year are to compete in NorAms and hopefully Jr. Worlds for the U.S. This year was mainly about recovering from my torn ACL injury last year. I was lucky enough to compete in a Canadian Open Tour, Canada Cup as well as the Step Up Tour. I got 3rd in both events.”

Bella also expressed her excitement about this summer where “an opportunity was presented to me to work with the U.S. Development Team in Mammoth, CA. at their Project Gold specialty camp. From there the hope would be to get on the U.S. Ski Team’s rookie team.”

Bella has crossed the threshold into the professional world and is now sponsored by Turbine Outerwear. There is a Facebook account set up to follow Bella Bacon in her endeavors and also she can be followed at baconskis.com.

The Villager sends all the best to Bella in her professional skiing career. Bella’s Dad admitting to being extremely excited himself when asked about his daughter following in his board tracks said, “Recently up North of Quebec, we found some steep, steep tree lines where Bella and her teammates were jumping off cliffs. She stomped all her jumps which made me so proud!

[Read Online at The Villager Newspaper]